Congrats to Apps4Africa 2011 Challenge winner Farmerline and the other teams from Kenya and Senegal who have been named winners in InfoDev’s mAgri Challenge. Winners will receive a spot at InfoDev’s Mobile Startup Camp as well as other resources aimed at helping them grow their businesses.

The four winners, along with fourteen of the best startups from infoDev’s business incubator network, will be invited to November’s Mobile Startup Camp. The Camp is designed to accelerate the growth of early-stage entrepreneurs. A five-day program of lectures and hands on workshops will provide participants with an opportunity to refine their product strategies, business models and marketing pitches, sharpen their negotiating skills and network with investors and peers.

It will also include a Demo Day – a pitching competition before a panel of industry experts and angel investors.

“We were looking for prototype-stage startups in a niche market, and were surprised to receive so many applications of high quality,” says Maja Andjelkovic, Mobile Innovation Specialist at infoDev. “These entrepreneurs are showing not only the potential impact mobile agri applications can have in Africa and around the world, but also the considerable talent behind innovation driven startups on the continent.”

Members of the jury representing leading private sector players in the mobile industry were also impressed by the entries.

Ernest Akinola, West Africa Government Relations for Blackberry said “The winners demonstrated robust and well thought through concepts, but many more entries showed niche applications for specific needs within the agri sector. I wish the best of luck to all of the founders who entered.”

We would like to congratulate all of the applicants, including the four winners and six runners-up below.

The Apps4Africa program has come a long way since late 2009 when it was conceived. For one, its evolved from a series of annual competitions into a full-fledged acceleration program. This was to address the primary feedback we got from the first few classes of participants funded by the program that the funding was great, but they really wanted ongoing mentorship, and opportunities for more funding.

As we focused on this on-going relationship with our companies, we realized that was one of the best ways we could help these portfolio companies to continue to accomplish much more, which they did! Entrepreneurs like Eric Mutta went on to raise over $300,000 for his startup Minishop, Alloysius Attah has traveled the world speaking about his company Farmerline, while other companies have found successes in other areas. The biggest need these guys have is maintaining a relationship with advisors and mentors like us as they grow and establish Africa’s next generation of game-changing services and organizations. 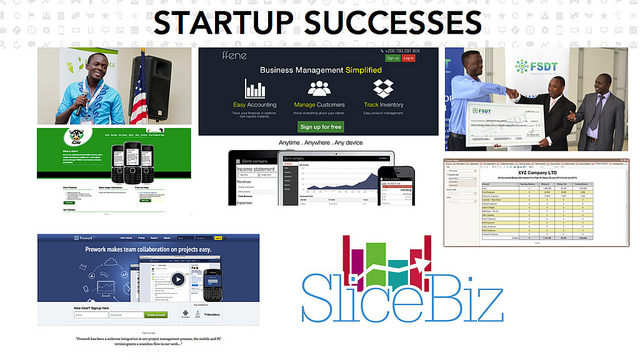 So this year rather than continuing the tradition of our challenges, we’re doubling down on this aspect of what we do by launching an Entrepreneur-in-Residence program! This program will work on behalf of four new companies who will join the ranks of our Apps4Africa participants, to benefit from the relationships we’ve established for our community of entrepreneurs. Similar to the previous ranks of A4A winners, these groups are social entrepreneurs using technology to solve challenges for Africa and, in some cases, the world.

These companies will receive funding, support and mentorship in varying degrees.  You can read more about the Apps4Africa EIR program here.

We’re proud to welcome them all to the family!

So what of the Apps4Africa challenges?  Well traditionally we visit anywhere between three and sixteen countries in an effort to find and engage with as many young entrepreneurs as possible.  We then run a competitive funding initiative that allows them to compete for $10,000 seed capital.  The ones that make it through the rigorous vetting and judging process go on to receive awards, funding and attention.

We haven’t ended this program, but due to the costs associated with the EIR program and maintaining the other aspects of the accelerator for our 2010, 2011, and 2012 participants, we’re putting off the Apps4Africa Challenge to early 2014.  If you’d like to learn more, you can follow this blog, @apps4africa on twitter or join our mailing-list here.

Sitting at the first Africa CEO Forum this week, in the heart of Geneva, I asked myself if this was the right time to open the debate on Africa’s private sector future. Was Geneva the right place? Critics will rightly argue that this sort of event should have been held in Africa.

Over two intensive days, top African chief executive officers shared with attendees from all over the Africa, Europe and Asia, some latest trends and best practices, discussed the future of the continent’s private sector, and received awards and accolades.

Speakers such as the outspoken Sudanese-born billionaire Mo Ibrahim tried to boost the narratives of Africa’s position compared to China and India but with little solutions to offer. When I asked him why the event was not held in Accra or Johannesburg, Ibrahim replied by stating that the reasons were more infrastructural and logistical than anything else.

We were in Geneva at the Africa CEO Forum where we met Dr Hischam El Agamy. He shared some tips on how to be a Great Leader. We caught him at the Casablanca room! Here what he has to say! Enjoy!!

The first ever DEMO Africa was held this week in Nairobi and was a big success. Here’s a summary of things that occurred, this is a cross-post from blog.appfrica.com.

On October 24th, 2012 Hillary Clinton announced the 3rd Apps4Africa competition at DEMO Africa in Nairobi, Kenya. Her pre-recorded video address to the audience was one of the many highlights of the DEMO Africa which brought investors and 40 of Africa’s finest startups together for rapid-fire 6-minute pitch sessions.

The announcement also marks a big change in the Apps4Africa model. This year the competition is targeting startups and businesses through competitive funding, offering a non-diluting path to venture capital, mentorship and other forms of support. Our goal is to catalyze the growth of Africa’s early-stage startups to address the issue of youth unemployment across the continent. Africa needs to create at least 120 million jobs by 2012 to maintain it’s current trends of a growing middle class. Those jobs are not going to come from government mandates or multi-national corporations, they are going to come from successful startups and entrepreneurs. With Apps4Africa 2012, Appfrica and our partners at the State Department, [email protected], and the World Bank are demonstrating our commitment to addressing this problem now and in the future!

We’re greatly appreciative for the remarks of Mrs. Hillary Clinton and the continued support of our friends at the State Department!

At DEMO young companies are offered 6 minutes to demonstrate their app’s utility, their business model and their case for investment. It’s very fast-paced and exciting for the entrepreneurs.

Keeping with that theme, we’ve selected 6 photos that capture the experience of the conference 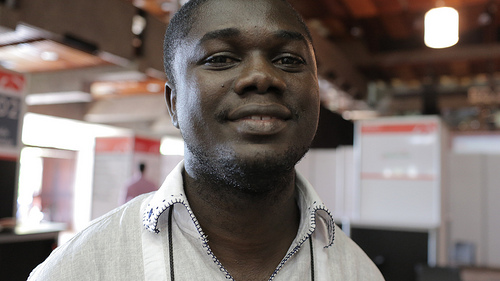 Emmanuel Addai (Co-Founder, Farmerline) was one of two entrepreneurs representing the Apps4Africa 2011 Winners at DEMO Africa 2012. Farmerline came in third in the 2011 Climate Challenge. 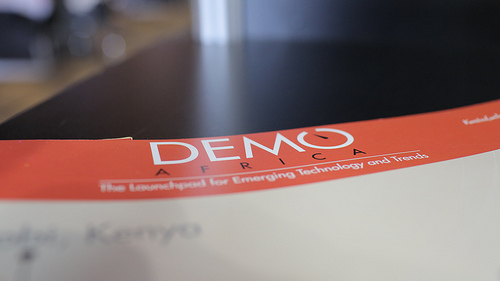 DEMO Africa 2012, the Launchpad for Emerging Technology and Trends 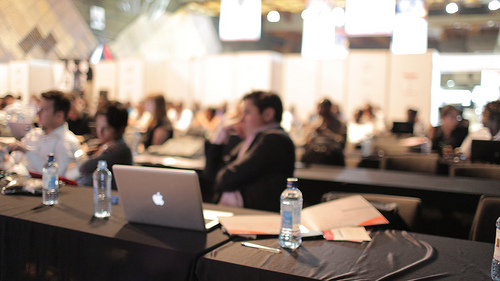 One shot at 6 minutes in front of investors, journalists, and other technologists. Would you be ready? 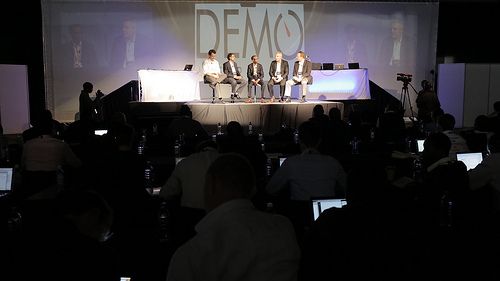 Intermixed with the pitches were panels and real-time feedback ‘sage’ sessions from seasoned entrepreneurs and investors. Some ideas passed their test, others were shot down right away for not being investable. 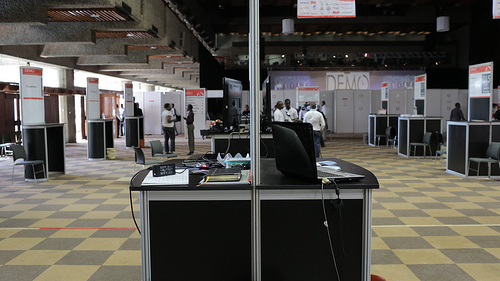 During the pitch sessions, the exhibition hall at DEMO Africa 2012 was relatively empty, but after, this was where deals were made and startups got their second or third chance to pitch investors one on one. 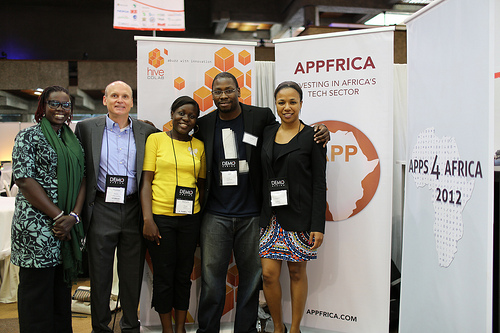 Our team was all over the place at DEMO! From left to right, Marieme Jamme of SpotOne Global and Africa Gathering, Thomas Genton of the U.S. Department of State, Barbara Birungi of HiveCoLab, Jon Gosier and Bahiyah Yasmeen Robinson of Appfrica.

We’re frequently asked to share the contact details and other information about the Apps4Africa winners and their various projects. We’ve been offering these details to various interested parties on request but obviously, as demand increases for this information, it gets harder to meet all requests. Today we’re releasing a public listing of all the winners of funding from our competitions to date! Keep checking back as we improve this page by adding details about each project, what the winners are doing now, and what they accomplished post-A4A!

Our own Marieme Jamme, who helped to execute Apps4Africa 2011′s West and Southern Africa competitions, was featured on CNN’s African Voices. We’re delighted to see the coverage on such powerful and inspirational individual and friend!

CNN — Senegalese-born Marieme Jamme is at the forefront of the technology revolution that is slowly transforming Africa.

As chief executive of Spot One Global Solutions, a UK-based company that helps information technology organizations gain a foothold in emerging markets, she encourages global investment in African IT infrastructure.
Armed with a strong desire to help Africa realize its potential, Jamme is outspoken about what the continent needs and how she can help.

This panel discussion was recorded at the Future Tense event: Feeding the World While the Earth Cooks, which was held in Washington, DC on April 12th, 2012

Moderator: Charles Kenny - @charlesjkenny, Bernard L. Schwartz Fellow, New America Foundation, Author “Getting Better: Why Global Development Is Succeeding — And How We Can Improve the World Even More”

When today’s toddlers are parents themselves, they will face an agricultural crisis. The world population will reach 9 billion. A growing global middle class will demand more food. And climate change will leave farmers holding seeds that won’t sprout. By 2050, will our global appetite outgrow our agricultural capacity? We held an event to find out how everyone—growers, technologists, governments, business leaders, and carbon-conscious consumers—will be part of the solution.